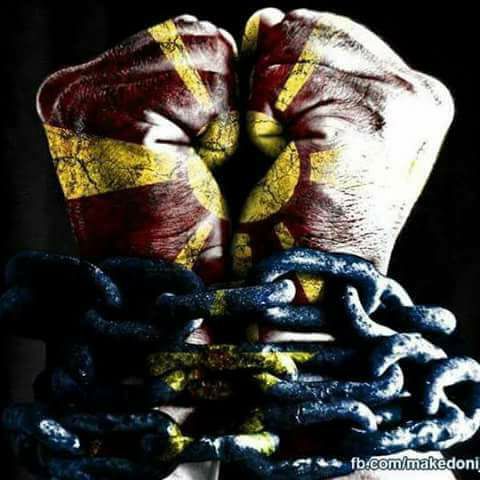 The 2016 early parliamentary elections in the Republic of Macedonia were the result of extensive pressure coming from the EU and the USA, which manifested itself through the Przino Agreement, signed only by the leaders of (the) four (major) political parties without taking the will of the people of the Republic of Macedonia into consideration and without any public debate or a referendum where the Macedonian people would have had the opportunity to express their opinion regarding the aforementioned agreement, an agreement that, in fact, went against the Constitution of the country itself.

The opposition-led, artificially created political crisis (despite a 3.9% GDP in 2016) that had started three years prior to that moment under the guise of “toppling the regime”, culminated in the 2016 early elections. In addition to being led by the power-thirsty SDUM, the so-called Color Revolution was also supported by NGOs, forums, and associations (heavily) funded by George Soros. This so-called revolution resulted in the installation of a regime where the rule of law would completely be disregarded. It turned out that the “toppling of a regime” had been only a pretext for the installation of a regime far worse than the one they had been fighting against.

On April 27, 2017, after 80 days of peaceful protests supported by the people all across the Republic of Macedonia, in what could be described as a coup d’etat, a Speaker of Parliament was elected in a completely illegitimate manner, totally disregarding proper procedure i.e. after the closing of the session, without a counter candidate, and with 48 out of the necessary 61 votes. To add insult to injury, in an attempt to foreshadow an occupation of the Macedonian territory, the Albanian national anthem – the national anthem of another country – was provocatively sung by an MP in the middle of the Macedonian parliament.

All Macedonian citizens have not only a right, but also an obligation to defend their country from various threats (Article 28 of the Constitution). All citizens had the unequivocal right to defend their freedom, democracy, and sovereignty that came under threat on April 27, 2017, especially from the MPs inside the National Assembly. The unrest that ensued came as a spontaneous response to the gross violation of the Constitution and the rule of law by the SDUM-led parliamentary coalition as well as the need to uphold guaranteed people’s rights.

In the days leading up to the incident, Zaev, the SDUM leader, had,allegedly  looked the other way when some unauthorized people managed to bring firearms illegally into the Assembly. Those were the people who started to shoot at the unarmed crowd. That kind of behaviour caused a revolt among the crowd who were unarmed. The protesters who entered the assembly in large numbers were peaceful, singing songs and shouting patriotic slogans about Macedonia. Only a handful of them behaved in an energetic way, mostly on the second floor where they offended some MPs, broke a couple of chairs, threw a few kicks and punches around, and swore at the MPs considering them to be the main culprits for the current situation.

TAKING INTO CUSTODY OF THE PARTICIPANTS IN THE CIVIL UNREST

The taking into custody of the participants in the civil unrest of April 27, 2017 began on November 27, 2017. Excessive force was used by the police in the process and the law was broken on several occasions by the judiciary. Numerous well-known patriots, who in the months leading up to the incident had expressed pro-Macedonian ideas about Macedonia being a sovereign and unitary country where the rule of law should be respected, were arrested for terrorism in the most violent way, simply because they were present at the Assembly. It was almost as if the arrests bore the sign of personal revenge on the part of Zaev and his SDUM, having been executed without any due process whatsoever. Many MPs from VMRO, the political party that had officially won the elections, were arrested in the same way, completely disregarding their parliamentary immunity, a fact that even prompted the French Ambassador in Macedonia to react vigorously against the undemocratic and cruel manner of behavior of the newly formed government.

Those arrests helped create an almost Gestapo-like atmosphere of constant fear in the country where the violation of human rights became a daily occurrence for anyone who dared to think differently from the official narrative of the SDUM.

There was no incriminatory evidence against any of the individuals who were arrested under the trumped-up charge of terrorism, especially evidence that they had been in possession of firearms or any other plans or documents for mass killings. None of them possessed any seditious literature, letters or evidence of collusion with others. None of them were members of terrorist organizations. In fact, there was nothing that could substantiate or justify the exaggerated indictment. All of the arrested individuals are outstanding members of society, respected by their peers and their families i.e. men of honesty and integrity.

The arrests of the MPs, and their subsequent intimidation and blackmail, had a different motive altogether, one that we found out about a little later, towards the end of 2018 and the beginning of 2019 when their votes (barely) secured the (illegitimate – 80 instead of 81 votes) parliamentary majority for the forced changing of the Macedonian Constitution. This change resulted in the restriction of basic human rights and in the discrimination against the Macedonian people i.e. the one entity that is the sole sovereign of the Republic of Macedonia. In fact, it resulted in the installation of a new Constitution that only suited the country’s occupier. . And all this after a Referendum on 30September 2018, in which the Macedonian people clearly and unequivocally expressed their will for NO to the Prespa Agreement, NO to changing the NAME OF THE STATE and the Constitution of the Republic of Macedonia and for which decision and Referendum, held on September 30, 2018 The State Election Commission officially  declared it is  NO SUCCESSFUL. https://akademik.mk/dik-za-referendumot-odlukata-ne-e-usvoena-bidejki-ne-glasale-poveke-od-polovinata-od-vkupniot-broj-gragani-zapishani-vo-izbirachkiot-spisok/

Among the arrested and, later, convicted is Jane Chento – a living brand of the Macedonian statehood and independence – an honest patriot and a father of two minor children. He is the grandson of Metodija Andonov – Chento – the first Macedonian President, elected at the 1944 ASNOM Assembly. Igor Durlovski, a world-renowned opera singer, is another. Two more areBoris Damovski, a director, and Vlado Jovanovski, one of the most famous Macedonian actors.  Mitko Chavkov, a high ranking police officer, internationally decorated for fighting against terrorism, is another individual who suffered as a result of the government change. These men are the sole providers in their families and respected members and role models in the Macedonian society. The premeditated arrest and character assassination of such outstanding individuals by the SDUM regime served (and still serves) only one purpose – to cause apathy and defeatism and to demoralize the Macedonian people in their struggle for basic human rights that were taken away by the changes in the Constitution in early 2019.

In the period that followed, despite the fact that there was no evidence for the indictment of terrorism whatsoever, the accused (see below) were sentenced to:

Some of the accused managed to escape from the country and avoid the terror of this regime:

The Ministry of Justice of the Republic of Macedonia, led by (then) Minister Renata Deskovska from SDUM, despite knowing that there is no basis for pressing charges for terrorism, made an official extradition request to the Greek officials for the two accused. After taking all evidence into consideration, the Greek court decided against extraditing the two individuals, on two separate occasions, one of which was confirmed by the Higher Court of Greece.

The Minister of Justice at the time, Renata Deskovska, made a similar request to the Swedish authorities who, in turn, responded that not only was there no basis for extradition, but also what happened on April 27, 2017 was no act of terrorism. It could only be characterized as a civil unrest, which could not be prosecuted as a criminal offense. Furthermore, the Swedish State and Courts concluded that this case was a clear example of political persecution against Dejan Davidovski and, consequently, all other participants in the civil unrest who had been charged with terrorism by the courts in Macedonia. They also advised Mr. Davidovski to immediately seek asylum in Sweden due to the threat imposed by the Macedonian government, manifested through the absence of the right to a fair trial, which is a basic human right that any democratic country must provide.

In terms of the rule of law, the last three years of the judicial system in Macedonia have been a clear example of a judiciary riddled with false accusations and politically-motivated guilty verdicts, predominantly commissioned by the former PM Zaev. Consequently, the Macedonian judicial system is in total disarray and it only serves to perpetuate the violation of human rights of the accused in question as well as create an atmosphere of fear and uncertainty for the lives and freedoms of everybody else in the country. Such a tyrannical judiciary becomes an instrument in the hands of the imposed SDUM-led government used only to intimidate, pressure, and blackmail political opponents. The trumped-up terrorism case, led (and usurped) by judge Kacarska in November 2018, was featured on the official website of Columbia University (https://globalfreedomofexpression.columbia.edu/) as an example of a case of a judge exhibiting gross misconduct during the trial and handing out unconstitutional punishment to both lawyers and accused alike. Needless to say, the draconian sentences that she passed are still in effect despite the reactions of the global legal community.

The actual encroachment on the Macedonian Constitution occurred when the dictatorial regime in power changed the Constitution by voting at the Macedonian Assembly on January 10, 2019. Those changes happened despite the results of the September 30, 2018 Referendum when the Macedonian people clearly and unequivocally voted against those changes being made. It didn’t matter that the results of the referendum were also officially confirmed by the State Election Commission. What did matter was that on the day of the vote, some of the MPs, having been previously arrested (and blackmailed) for terrorism for the events of April 27, 2017, were released from their jail cells and brought to the Assembly directly in order to cast their votes for the constitutional changes. One might wonder at the absurdity of the whole situation where “terrorists” are dragged from prison to vote for a Constitution that only suited the SDUM-led coalition.

The Amnesty Law followed suit, which was supposed to legally absolve the participants in the events of April 27, 2017. However, this law also violated the human rights of the (21) accused because it was applied selectively i.e. only some participants were eligible to be amnestied, not all. So, the amnesty became an instrument of intimidation and blackmail of political prisoners. Selective amnesty is an unknown term in international law.

All of this is indisputable evidence that there is political persecution in Macedonia and that the rule of law is totally disregarded. There are political prisoners who are being treated inhumanely by the undemocratic SDUM-led regime and that treatment includes gross violations of the prisoners’ basic human rights and freedoms, obstruction of justice, absence of their right to a fair trial as well as psychological and physical torture.